The 70,000 fans inside San Antonio’s Alamodome on Saturday night were anticipating what most national semifinal games turn out to be – a back-and-forth, heavyweight clash between two blue-blood college basketball programs. What they witnessed instead was an offensive performance that reached a historic level of proficiency, turning the opposing team into nothing more than a fly on a windshield along the way.

The Villanova Wildcats drained 18 three-point baskets en-route to a 95-79 victory over the Kansas Jayhawks, setting a new NCAA record for made threes in a Final Four game. A little less than four minutes before halftime, the Wildcats tied the existing record after nailing their 13th trey, and 61 seconds into the second half, they broke it with their 14th. The only thing standing in the way now of a second national championship in three years for Jay Wright and Villanova are the 3rd-seeded Michigan Wolverines, whom they will face on Monday night.

Villanova showcased their seemingly limitless shooting range and machine-like offense early and often, stunning the Jayhawks by converting 6 of their first 10 attempts from beyond the arc, all accompanied by an assist, to take a 22-4 lead before the game was seven minutes old. National Player of the Year Jalen Brunson scored 13 points in the first half while Omari Spellman and Eric Paschall added eight points apiece, with Spellman also contributing nine rebounds.

As the second half began, Kansas applied pressure onto the perimeter more aggressively to try and slow down the long-range Wildcat onslaught. As soon as they did, however, ‘Nova recognized the gaps in the paint and began to drive the lane. During one stretch, the Jayhawks were down by 15 points, scored on five straight possessions, only to then find themselves down by 17. That, in a nutshell, is how the night went for Kansas.

Paschall scored 10 of Villanova’s first 12 points in the second half as the advantage grew to 20, 59-39, on his three-point basket with 15:13 to play. Two minutes later, Omari Spellman’s mid-range jumper widened the gap to 22 points, 67-45, giving the Wildcats their largest lead of the night. Kansas would get to within 14 points, 71-57, after Malik Newman’s jumper followed a brief cold stretch from outside for the ‘Cats, but similar to their chances of advancing past ‘Nova, the hope of a comeback for the Jayhawks evaporated in a flash. A deep three off the hands of sixth-man-of-the-year award winner Donte DiVincenzo grew the lead back to 20, 83-63, and the rest, as they say, was history.

Lost in the offensive bonanza was the continued improvement of the Wildcat defense. On February 12th, Villanova’s adjusted defensive efficiency, as calculated by Ken Pomeroy (kenpom.com), was ranked 48th in Division-I. By the time the ‘Cats arrived in San Antonio for their date with the Jayhawks, that ranking had risen all the way to 14th. Combined with their prolific offense, the data had aligned perfectly with what ‘Nova had shown on the court over the last month-and-a-half, progressing from a team not good enough to get to a Final Four if their shooting went cold on any given night, to a squad that can decimate and embarrass an experienced and talented team like Kansas on a national stage.

When asked about the genesis of the team’s drastic defensive improvement, Jay Wright said on Friday what he’s said a lot lately, pinning it on the tremendous on-court growth by redshirt-freshman Omari Spellman. “Probably individually the most important part of our growth as a team,’’ Wright said. “Everybody else on our team is pretty experienced. And to get this far, you’ve got to have a good big man.”

Wright went on, talking about how Villanova has always had good perimeter players, but two years ago during the Wildcats’ 2016 championship run, Daniel Ochefu had dominated underneath the basket in the NCAA tournament and was as big a reason for them winning the title as any other.

“And Omari has approached that level,” Wright said, speaking specifically about his defensive effort. “I don’t think he’s at the level Daniel was yet, but if not for him and his development, we probably wouldn’t be at this point. Other guys are kind of…they’ve each improved, but not at the rate that Omari has.”*

Villanova, currently a 6.5-point favorite over Michigan, will take the court Monday night as the biggest national title game favorite since Duke was favored by 7 over Butler in 2010. Winning their first five tournament games by an average of 17.6 points, the Wildcats have run roughshod over each opponent that has stood in their way. The Michigan Wolverines, winners of 14 straight games, haven’t lost since falling to Northwestern on the road on February 6th. Their road to the national championship game, however, has not been quite as smooth as Villanova’s. They needed a last-second, near-half-court buzzer beating 3-pointer to knock off the Houston Cougars in the round of 32, and barely escaped defeat at the hands of Florida State in the Elite Eight, winning by just four points.  The Wolverines are ranked 3rd in the nation in adjusted defensive efficiency, and will need to put forth the best defensive effort of their lives Monday night if they hope to hoist the national championship trophy.

*[Quote by Jay Wright courtesy of Mike Jensen (@jensenoffcampus) of the Philadelphia Inquirer and Philly.com – link]

One thought on “Wildcats bury Jayhawks behind barrage of threes, advance to National Title Game against Michigan” 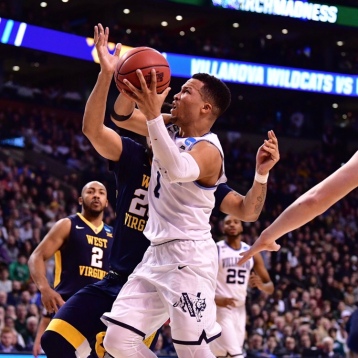 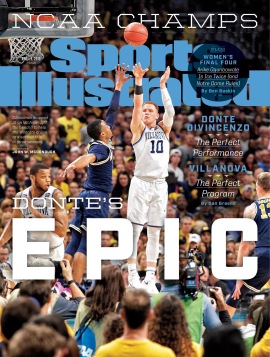 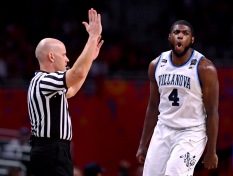 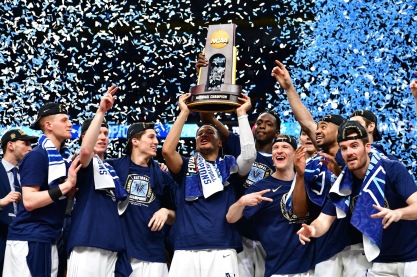 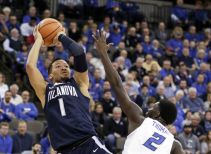 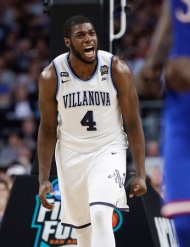 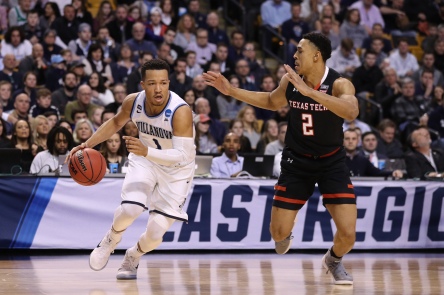 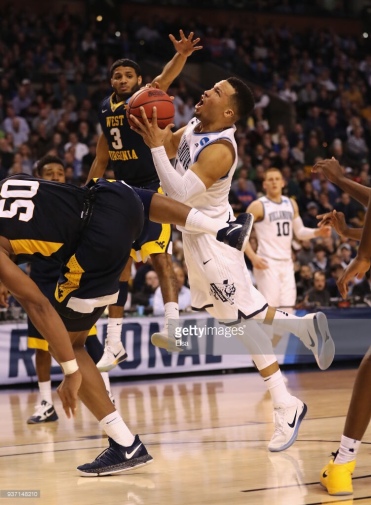 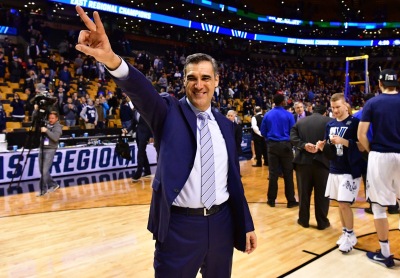 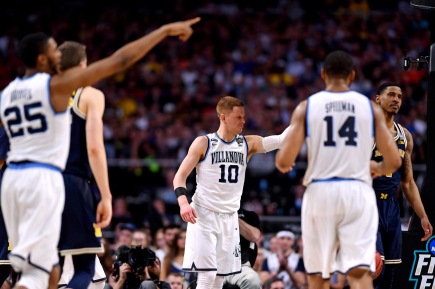 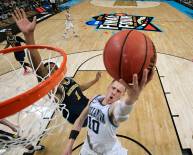 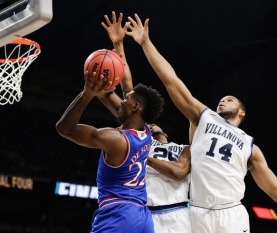